The Wax Chandlers’ Master of Bee Farming Award is a unique prize open to us through our Rowse/ BFA apprenticeship scheme.  It is a City and Guild and Livery Companies Skills Council award scheme for people who have really reached the pinnacle of the industry – technically the highest award in bees. A lifetime achievement award.

The Bee Farmers Association nominates candidates who are endorsed by our Court.  This year we have two awards and the presentation takes place at a glittering ceremony on March 14 at Mansion House by The Rt Hon Lord Mayor Alderman Vincent Keaveny in full regalia.  A large number of other livery companies also take part.

Since the event began in 2014 we have awarded certificates to bee farmers:

This year’s winners are John Whent and David Wainwright – more about them in future articles.

Here we show Past Master Arthur Davey at the ceremony in 2018: 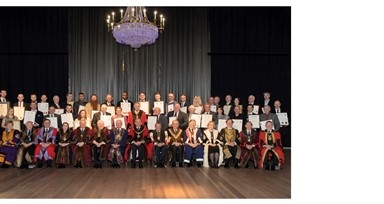 And in the first picture (cover photo), we see the last time the ceremony was held in 2020 when Mike Brown and Steve Sunderland got the award and a special mention from the Lord Mayor as the “two most senior beekeepers in the country.”  Mike and Steve were just retiring as respective heads of the English and Scottish government bee units.