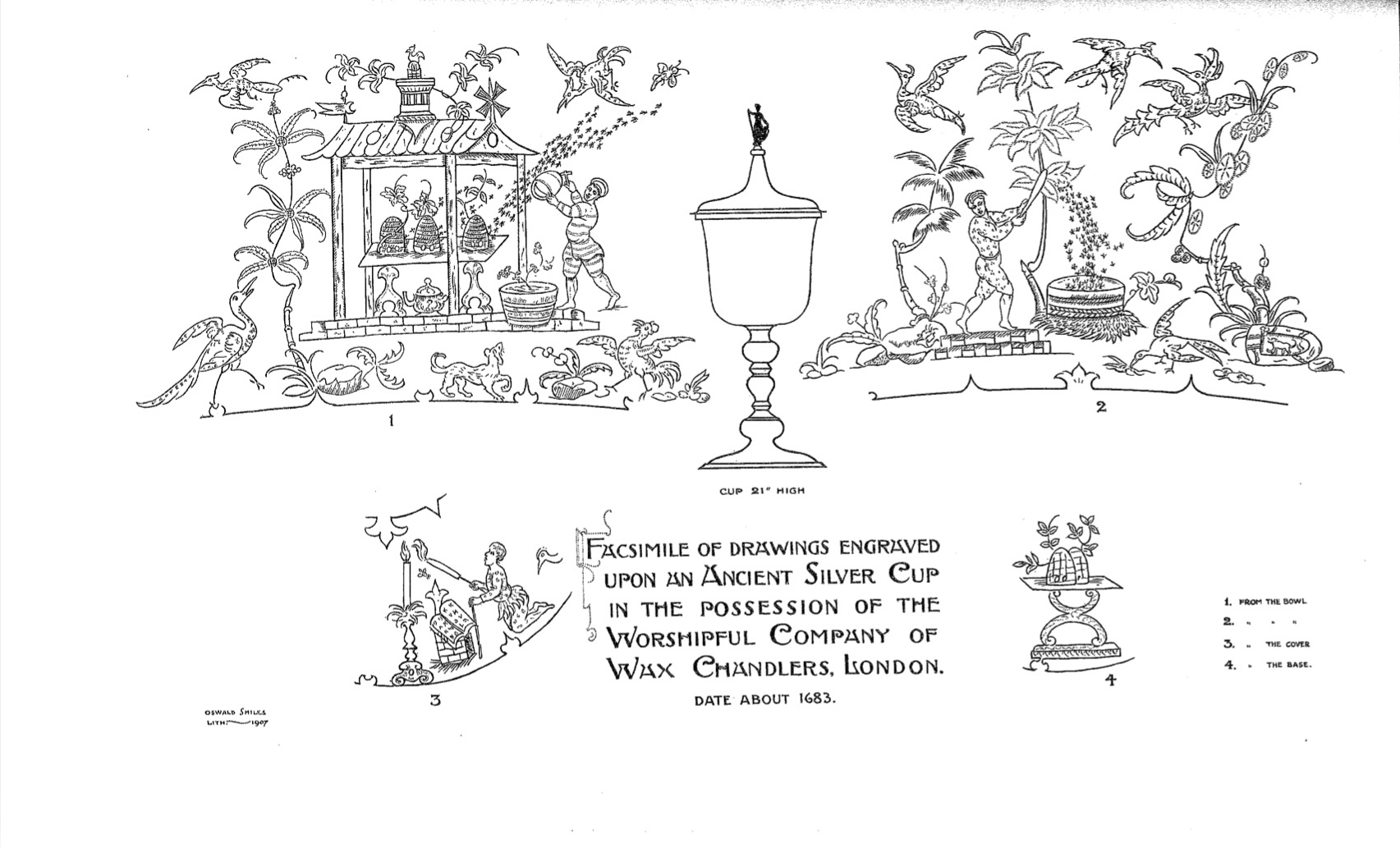 The greatest treasure is the standing cup, which was acquired in 1683 from Richard Normansell, the company’s tenant in Aldersgate Street, and is still known by his name.  Normansell, who is said to be a ‘secondary’ or deputy-in-charge of the Computer in Poultry, owned property in St Botolph-without-Aldersgate, and he had become interested in ‘two messuages near the church’, which were leased to a tenant at £20 a year.

They were in such a bad state of repair that he spent £250 putting them in order, and on 18 October 1683, the Wax Chandlers granted him a repairing lease for 53 years from Christmas 1691 at £10 a year; for this he paid the company £170 and handed them silver plate to the value of £20 – hence the Normansell cup.

The chief feature of this cup, and one that suggests it was made specially for the Wax Chandlers, is that the cup is engraved over the whole surface with subjects and articles relating to the production and manufacture of wax.

On the cover are shown a taper-roller fitted with scissor-snuffers, a melting cauldron on a fire, a man with a ladle and turnspit, a figure lighting a large taper beside a reading-desk, and a woman with a sickle cutting cotton for wicks. bIt also has a gilt finial depicting a female figure, probably Minerva, with a spear and shield.

On the bowl, besides the arms for Normansell and the company and an inscription recording the gift, are a man ‘tingling’ or charming a swarm of bees and another hiving bees from the bough of a tree.

On the foot are bee-hives on stands and some miscellaneous devices. bThe Normansell cup is one of those used regularly at the company’s banquets for the ceremony of the ‘loving cup’.

The cup celebrates the importance of honeybees in the 17th century and they are just as important today – not just for wax and honey but in helping pollinate, with other insects, much of the food we eat.

The Wax Chandlers’ Company is a major player in the Livery Companies Apprenticeship Scheme (LCAS).  In 2013 teamed up with the Bee Farmers Association, DEFRA, Rowse Honey and other commercial sponsors B J Sherriff to design and deliver a unique world-class training programme to bring young people into commercial bee farming – that is earning a living from bees.  More than 30 youngsters have benefitted from the scheme working towards the qualification the Wax Chandlers’ Diploma in Excellence in Bee Farming.

We have also taken part in LCAS and C&G Masters Award Scheme to recognise bee farmers at the top of their profession and have granted the Worshipful Company of Wax Chandlers Master of Excellence in Bee Farming to nine people.

We have hosted several Bees In Business events at the Hall providing a platform for Government ministers to talk about their National Pollinator Strategy programme and awards.

The company also supports bee charities like Bees Abroad and Bees for Development which promote sustainable beekeeping in places like Africa.

We are also major sponsors of the National Honey Show which aims to encourage and promote beekeeping showcasing honey and related products together with lectures and workshops.